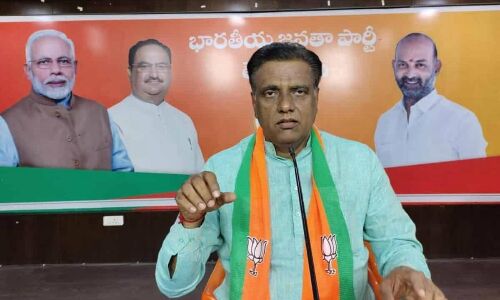 Addressing the media right here, Sangappa took solid exemption to IT Minister K T Rama Rao making ironical statements versus the Centre as well as PM Modi on international dirt while dealing with Persons of Indian Origin (PIOs) throughout his present scenic tour.

He stated “it has become a habit for Chief Minister K Chandrashekar Rao and KTR to speak not only ill about the PM, but also belittling India comparing it with Pakistan Afghanistan and China. He said POIs across the globe are well aware of the initiatives of Modi and the development taking place in the country.

He recalled KTR has only boasted about investments drawn to the State, while neighbouring Karnataka has attracted more investments. He asked the son and father duo to restrain speaking ill about the country and advised them to check facts of the current plight of people in Pakistan.

Subhash said the newly inaugurated train is the best available facility for people and ‘Vande Bharat’s speed is 130 kmph.He alleged that BRS leaders have been indulging in levelling baseless charges against the Modi government. He charged that the KCR government did nothing to improve transport facilities in the State during the last eight years. Not even one single new bus has been purchased; TSRTC is now in doldrums.

Taking a dig at the BRS and Congress leaders for their reluctant response on the newly inaugurated train, Subhash said probably they might have not liked the inclusion of the ” Bharat” word in the name of the train. They will be happy if the train is renamed after the rulers of Muslims and the Nizam, like Mukkaram Jah and Mir Osman Ali Khan or Sallahuddin Owaisi, he quipped.