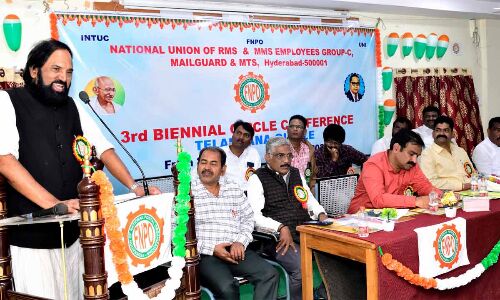 
Hyderabad: MP as well as previous TPCC president N Uttam Kumar Reddy on Monday restated the need for abolition of the Contributory Pension Scheme (CPS) as well as remediation of the old system for the Central as well as State government workers.

Addressing a conference of the workers’ union of Railway Mail Service of P&T Department at Sundaraiyya Vignan Kendram, he labelled as’ regrettable’ that Prime Minister Narendra Modi as well as Chief Minister K. Chandrashekar Rao were both transforming a deaf ear to the need of the workers for the remediation of old pension plan system …”It has been proven in Himachal Pradesh and Chhattisgarh, that the party supports the demand for restoration of old pension scheme.

Uttam strongly condemned the Centre and TRS government for not abolishing the controversial CPS despite serious objection from the employees. He said under the old scheme, the employees got a defined pension; an employee is entitled to a 50 per cent amount of the last drawn salary as pension.

He said the party has restored the old pension scheme in four States where it is in power. The “Congress federal governments in Rajasthan, Chattisgarh as well as Himachal Pradesh as well as the JMM-led UPA Govt in Jharkhand have actually rebooted the OPS for their workers,” Reddy included.