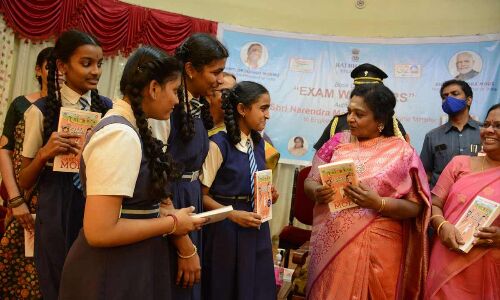 
Hyderabad: Governor Tamilisai Soundararajan took solid exemption to the way in which the Governor’s workplace was criticised by the leaders that talked at the BRS public conference at Khammam on Wednesday.

Speaking to newsmen on the sidelines of a publication launch program at Raj Bhavan on Thursday, Tamilisai stated, “Chief Minister K Chandrasekhar Rao insulted the office of the Governor.”

She additionally took argument to the government not educating her regarding the Republic Day events where the Governor takes the guard of honour and also addresses the celebration.

“I am doing my duty and I know the protocol pretty well. The state government first needs to answer why it was not following the protocols,” she stated, including that CM condemning the Governor reveals the type of perspective the government has in the direction of the workplace of theGovernor “They first need to explain this,” she stated. “I will react to the issue of pending files only after the government makes its stand clear. They cannot go on criticising and blaming the Governor like this,” she included.

Tamilisai stated that she will certainly talk on the pending concerns (indirectly describing the clearance of the Bills) just after the government appeared on the method offense.

Maintaining that she was releasing her tasks with no impact from the Union government, the Governor stated that She was not yet notified regarding the Republic Day events. It might be discussed right here that the Governor had actually carried out the Republic Day events in Raj Bhavan last year as the government steered clear of from the program as a result of political break in between the CM and also Raj Bhavan.