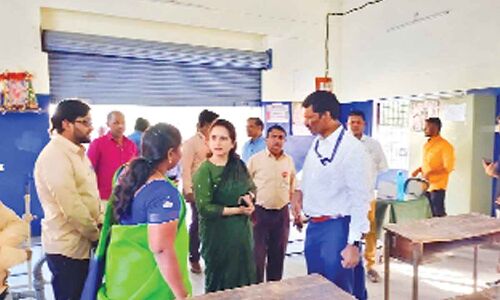 
Bahadurpura: For the very first time in twenty years, a group of elderly authorities from Ministry of Skill Development as well as Entrepreneurship, New Delhi made a shock see to Government Industrial Training Institute (ITI) Old City at Bahadurpura additionally called ITI Old City on Tuesday as well as supposedly took major note of bad upkeep as well as worthless state of hygienic event in the technological organization.

According to resources, the group of authorities including Director General of Training (DGT) functioning under the Ministry of Skill Development Entrepreneurship Trishaljit Sethi as well as Regional Director for Skill Development AP as well as Telangana Srinivas Rao, went round the area as well as read the training procedure under various professions.

Unhappy over the bad upkeep as well as worthless state of hygienic events next to absence of correct tools as well as equipment, the DGT took umbrage over the authorities at the helm of events at the commercial organization as well as battered a multitude of quarries one after one more looking for descriptions.

“Though the department has provided a required amount of funds and instruments, no sufficient staff and raw material was provided at the institution to run training classes. Apart from this the institution has failed to implement an apprenticeship program,” the authorities listened to stating. The authorities were also discovered dissatisfied over the worthless state of hygienic events.

It concerns state below that the HANS India, two times in the past, has actually elevated the concern of bad efficiency as well as worthless state of hygienic events besides the brazen degree of infringements over the land alloted for the organization at ITI Old city.

Two records such as “With no infra, ITI in Old City fails to provide skills to trainees” released on May 8, 2022 as well as “Old City ITI cries for officials’ attention” showed up on July 30, 2022 described a lot regarding the bad design of working of the Industrial Training Institute in theOld City