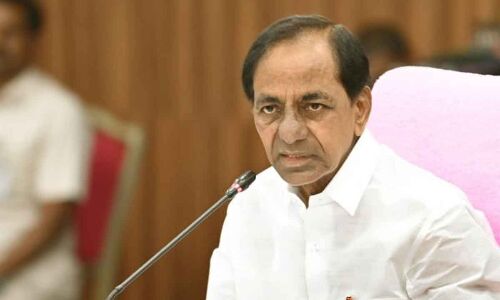 The CM saw the brand-new Secretariat as well as examined the progression of collaborate with R & & B authorities as well as additionally the agreement firm. Officials stated KCR encouraged the firm to make some adjustments in his chambers, generally the area of some write-ups as well as inside in conformity with ‘Vastu’.

The CM evaluated the whole location beginning with the front door of the Secretariat to 4 edges of the structures where the last touches of the building and construction gets on. He saw the different structure embarked on for financial institutions, canteens, ATMs, media centre as well as waiting spaces for site visitors.

He additionally evaluated the Chief Secretary’s chamber, the workplaces created for government advisors, consisting of CMO Secretaries, PROs as well as various other CMO team.

The CM additionally evaluated the specifically organized water fountains on both sides of the primary entrance. He saw the yards, roadways, vehicle parking as well as horticulture job. He asked from firms concerning the job progression. The CM went rounded air conditioning plants, generators mounted with VRV modern technology as well as the fire-fighting system mounted for optimum security.

Instructions were provided to designers as well as Minister Prashanth Reddy to finish the job of landscapes, sewer jobs, red sandstone, fire safety and security, electric as well as flooring jobs.