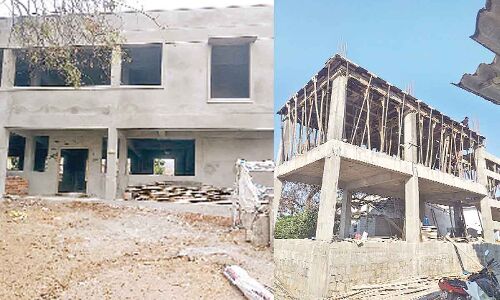 
Rangareddy: An unproper preparation to bring in all natural development in metropolitan as well as backwoods, launching of funds for development exclusively boundaries to roadways, water as well as cleanliness sans any type of practical technique to procedures like advertising collections particularly in Rangareddy area.

Every district has a required to pay 8 percent of the complete earnings collection from Property Tax as collection cess toZilla Grandhalaya Samstha However, it is discovered that neither adequate funds are being launched regularly to Zilla Grandhalaya Samastha neither the propositions it created the building of brand-new collection structures are obtaining a nod from the government considering that 2018.

While GHMC needs to pay us over Rs 50-64 crores, the Municipalities particularly in Rangareddy area alone has a past due of Rs 12 crores that leaves out the collection cess fees of Rs 2 crores fromGram Panchayats Whatever collection cess is being gotten is primarily from Municipalities as well as Gram Panchayats, while GHMC is not paying a dime to us considering that 2009,” claimed M Manoj Kumar, Secretary Zilla Grandhalaya Samstha (ZGS), Randareddy.

In Rangareddy district, Badangpet and Manikonda municipalities alone have an overdue of Rs 3 crore each. Remaining 14 ULBs have to pay the remaining Rs 6 crores to the Samstha. Though the government is releasing funds to the tune of Rs 50-60 Lakhs every month, all this has been spent on reconstruction of old library structures posing a serious threat to inhabitants,” discussed Bheemanapalli Satyam,Librarian Badangpet District Central Library

Elaborating regarding the funds got as well as the procedures used up by the Samstha, he claimed, “Apart from a district central Library at Badangpet, we have a total number of 24 branch libraries and seven village libraries in the district. ZGS received a total fund of Rs.8 crores since 2018. Apart from this, Samstha got additional Rs.25 crores at the time of delimitation of districts as part of its share. So far, we have taken up reconstruction of libraries in Shabad, Kuthur, Shamshabad, Shadnagar, Amangal, Manchal and Badangpet mandals spending a total Rs 12 crores. ”

“We built the Central Library at Badangpet spending funds to the tune of Rs 5 crores and shifted the head office from Saroor Nagar to newly constructed building at Badangpet. However, no new building has been sanctioned by the government. Only reconstruction of old and dilapidated buildings were done using a fund of Rs 12 crore since 2018,” the main notified.

Claiming that the restoration of the old collection finished in Shadnagar where commencement is set up to be kept in 2 weeks, the authorities claimed “the work of libraries in Shamshabad and Amangal mandals is in advanced stage and will be completed in one or two months. However, works of the remaining libraries will take another 5-6 months to complete.”

“We made representations to the government for setting up new libraries in newly formed municipalities but yet did not get any nod for the same. Some municipalities are taking gripe under non-existence of libraries in their jurisdiction, urging us to set up the same first before asking for the share of library cess,” claimed the authorities.